Saints organize a stance in support of abortion rights

On May 2nd, the news site Politico released a bombshell that shook the country: a leaked draft opinion showing the conservative justices of the supreme court’s plan to overturn Roe vs Wade. Roe vs Wade was a landmark supreme court decision in 1973 that legalized abortion in the United States. The precedent being reversed will be the most treacherous threat to abortion rights seen in almost half a century.  More than 20 states have laws that would restrict or ban abortion following the fall of Roe, and many pro-choice advocates are also concerned about the effect the supreme court’s decision will have on birth control access.

Following the news of the SCOTUS majority draft opinion, protests have swelled throughout the nation — and the pro-choice supporters of SDHS had their own day of representation here on campus on Monday, May 9th. 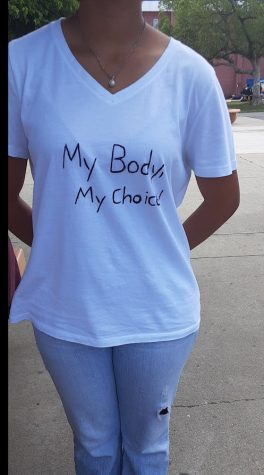 Pro-Choice supporter Monica Pastor quickly took action and organized a silent protest on May 9th that consisted of students wearing shirts with messages supporting pro-choice.  Pastor states that  “Well I think that everyone should have an option when deciding what they want to do with their individual bodies and I feel like a lot of people hold their opinions over someone else’s choice.”  When asked about what got her interested in the pro-choice movement, she explained the issue is personal to her.  “As soon as I found out about that, it was honestly something personal just because my brother is a doctor and he’s told me about his personal experiences performing abortions for other people and when I heard that this is something that’s going to be potentially taken away from us, I just felt personally attacked honestly because girls in high school are the main statistic that is using abortions and actually having to go to them as a last extremity so the idea of that being taken away was really scary.”  Pastor, motivated to take action, talked to her friends about the issue, “And during Culinary, I just set up an entire poster and shirts and I was like ‘ok, we’re gonna do this.”

A sophomore who participated in the demonstration, Citlali Salazar,  describes why she is pro-choice.  “I’m pro-choice because I feel that it’s just a human right to have control over your own body and I feel that by trying to impose controlling women’s bodies, it leads to so many other negative things.  And just in general, it’s not humanly right.” Salazar speaks about her reaction to the future Supreme Court overturning of Roe vs Wade.“The first time that I heard about the possible overturn of Roe vs Wade, I was just immediately enraged because it’s so frustrating that we’re gonna go back in time to when women are not gonna be able to have healthy places to get abortions because women still did get abortions back then even when it wasn’t legal. It would impact them a lot more because they didn’t have the healthcare for it”, she says with passion. Salazar firmly believes the decision to have an abortion is nobody but a woman’s choice.  Her commitment to true choice is evident when she declares “I’m not pro-abortion either when I say I’m pro-choice. I’m just pro- your choice.  This is your body and your control over your own body.  If you want to get an abortion, ok.  If you don’t want to get an abortion, ok.  I feel like it’s no one else’s decision but your own.”

When inquired about whether she is planning on any other protests or events in the future, Pastor voices that, “Hopefully I don’t have to, I don’t want to make protests or have to worry about these things obviously, but if there’s something else that I feel like needs to be heard – ‘cause I feel like a lot of things in our student body are underheard – then of course I will.”  Her dedication is clear.  And she tells of how other students can help this cause by donating to organizations like Planned Parenthood and “doing research and telling their parents who are voting or themselves if they’re 18, just being more conscious of who they’re voting for and what the person stands for.”

We need to make a voice and a stance. This isn’t what we want. The people don’t want this. ”

The May 9th protest, along with events like Courageous Conversations, are markers of a powerful theme that lives inside the hearts and minds that make up San Dimas High School:  students who speak their truths and stand up for what they believe in. “…It’s important to talk about these sort of things because even though we’re not voting yet, we’re still going to make those decisions and we need the adults to know that these decisions are gonna be impacting us in a couple of years,” remarks Salazar, following up with an empowering final statement:  “We need to make a voice and a stance.  This isn’t what we want.  The people don’t want this.”