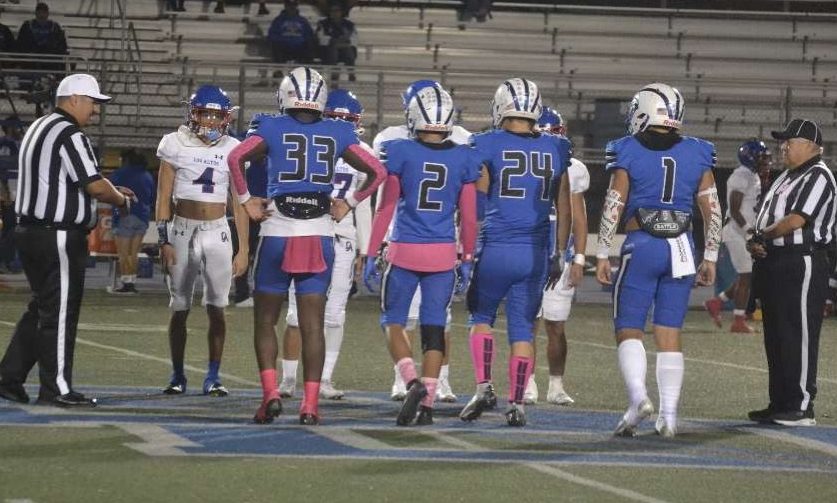 Saints Conquered by the Conquerors on Senior Night

On Friday night October 21, 2022, the Los Altos Conquerors defeated and spoiled Senior Night for the San Dimas Saints. The Saints going into the game were on a four game winning streak and the Conquerors came off two blowout losses. With this being said, the Saints were supposed to come in and mow through the Conquerors. That just didn’t happen Friday night though.

Senior, Matthew Sanchez, said,”we were missing a lot of our starters” when asked the main reason why they struggled on Friday. The Seniors this year have led San Dimas to a great record at 6-3. Junior, Jacob Gonzalez, said,”The Seniors have set a tone for us underclassmen, they have helped the whole team with their leadership and experience” when asked on how the Seniors have impacted the team this year. The first score didn’t occur until midway through the second quarter when Senior, Raymond Oviedo, rushed in for a touchdown. To finally end the first half, Sophomore Caleb Morquecho rushed in for a touchdown. The score at half was 14-0 Saints.

San Dimas fans were getting comfortable and preparing for the win. The second half just did not go well for the Saints. Los Altos made the stadium go quiet when they scored two rushing touchdowns to tie the game up at 14. Finally with two seconds left in the game, the Conquerors drilled a field goal to win the game 17-14.  The Conquerors shocked Valle Vista League with this win.

The Saints had a rough game offensively due to the fact that their starting quarterback Junior, Jacob Gonzalez, was suspended for this game and star running back Senior, Brian Freeland, got hurt during the game. The Saints finish the season next week against Northview.