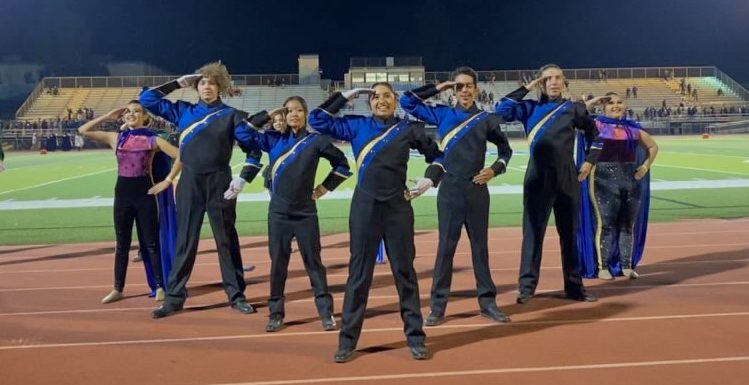 November 12th, 2022 marks the day that San Dimas Royal Crops received the highest score in school history and qualified for the second time ever to state finals. The Royal Corps performed its 2022 “Portal” program at California High School in Whitter, CA. They received a score of 84.825, three points higher than their last personal record.

When the bands finish performing they go back to their trailers to change out of their uniforms and return to the stands to watch the other schools perform their shows. The awards ceremony starts shortly after and the audience watches the leaders of each marching band line up on the field and receive their scoring. Before the awards ceremony, a poll was held where the audience was able to choose their favorite band that had performed. The audience chooses the San Dimas Royal Corps for the “Division 5 Viewer’s Choice” award.

The night turned very emotional for many students in the band, many of the seniors were brought to tears by the accomplishments that the band had made. They say that it´s the “best senior year of marching band season that they could have ever asked for.” Not only were seniors proud of this season’s performance but drum major Ayanna Garcia expresses, “when I heard our names being called and our placement I was extremely proud of our band and I knew that it was well deserved.”

With the qualification for State Finals, this meant the Royal Corps would be competing against the top 16 schools in the state the following Saturday, November 19th. This also ensured another week of marching season for the band. “I am glad that I get to hold on to the seniors just a little bit longer,” Ayanna expresses about being given the opportunity to continue to work with and conduct the 2022 season band.

At finals, the Royal Corps placed 12th out of the 16 schools and completed the end of their season.