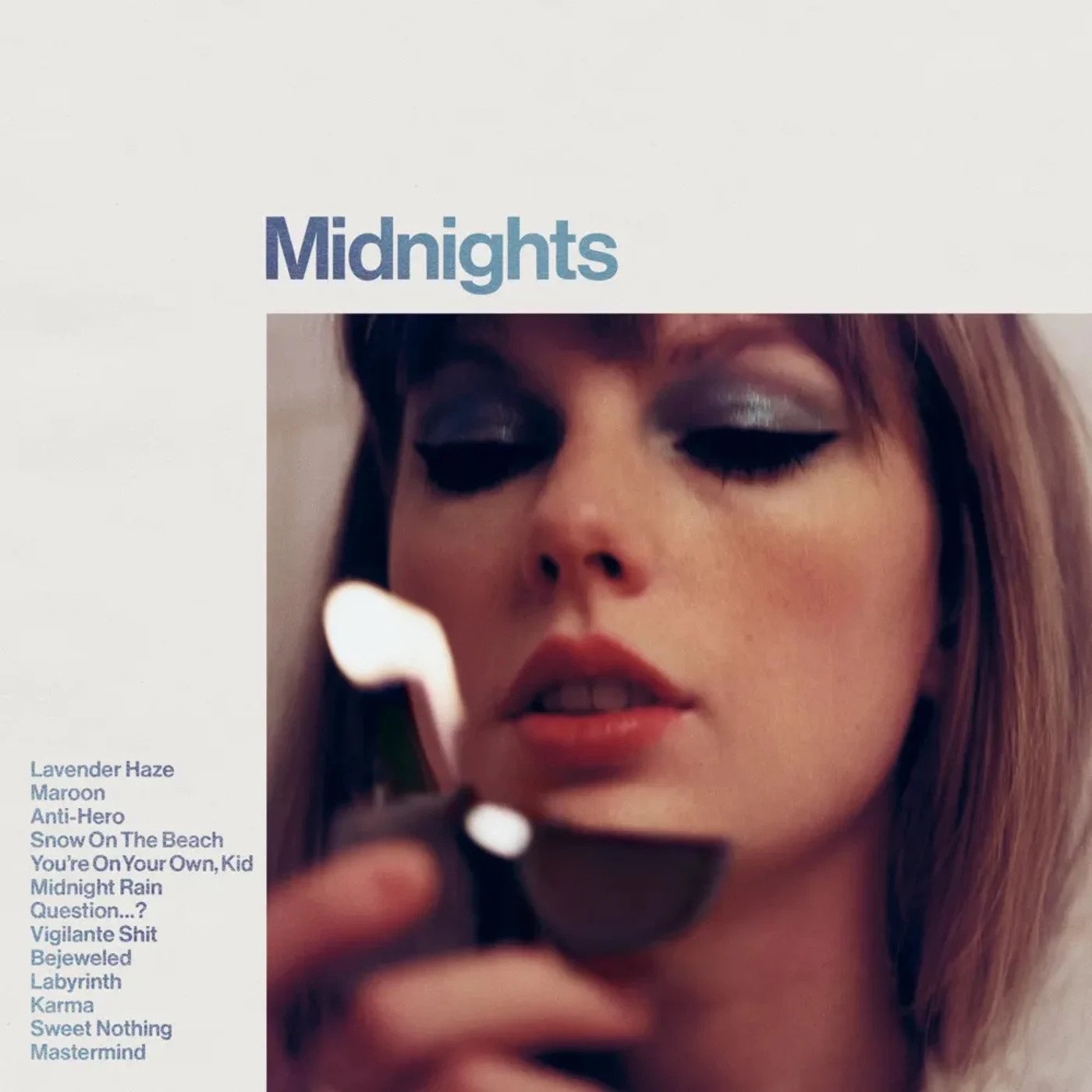 Taylor's 10th album has been released, where do the Saint's stand?

Taylor Swift is a loved and talented artist worldwide with hit albums and a current new one; this album (which marks the tenth one), Midnights, was released on October 21, 2022. Midnights came out at twelve A.M, and then Swift later released a three A.M version ‒also released at three in the morning‒ adding seven new songs. As the album blew up overnight, new Tiktok dances such as the ‘Bejeweled Strut’ took social media by storm. Many Saints love the new album and some, hate it.

Senior, Rosalia Velasquez admittedly has only listened to snippets of the new album on Tiktok or on other popular videos. So far she’s heard Bejeweled, Anti-Hero, and Would’ve Could’ve Should’ve, Swift’s more popular songs. “I’ve heard from Mrs. Lehrmann herself that it’s very Dr. Suess-like and end rhyme scheme, just very back to mainstream pop,” Velasquez states. Many might say that this album is super repetitive and has no lyricism unlike her other hit albums Folklore or 1989. This album seems as if Swift is going to basic pop formats and basic lyricism; leading many people (fans or not fans) to question where her creative writing, which she previously had in other popular albums, went. With Midnight’s songs, Velasquez considers it as something you’d hear in the background while shopping at Target.

She says that there’s nothing that’s outstanding to her and feels as if with the songs she’s listened to, she couldn’t tell them apart. Although she does have some minor exceptions such as the riff part in Bejeweled. But when asked about Swift herself, Velasquez states, “I don’t hate her, I’m just not the biggest fan of her. There are some songs I do like and I’ll listen to childhood pop hits such as Dear John, Teardrops on my Guitar, and New Romantics”. Many people also love her older music rather than her newer hits; depending on what songs/albums they grew up with or what their music taste is.

Swift’s music had a huge transition from country to pop back in the early 2000s (which was very successful) and although people may not love her newer music, respect for Swift is still there.

“I know that she started off deep in trenched into this midwest/southern country girl aesthetic but then with Red and 1989 right after, she had a very successful conversion into pop and I think with that respect that she is very admirable,” Velasquez explains. In comparison to Velasquez’s favorite pop albums, such as Carly Rae Jepson’s new album, she feels as if it’s better than Midnights- even in comparison to Swift’s older albums, she feels like there was more emotion put into the songs than this new album. “Given what Taylor has done in the past, I feel like she can do much better,” Velasquez claims. 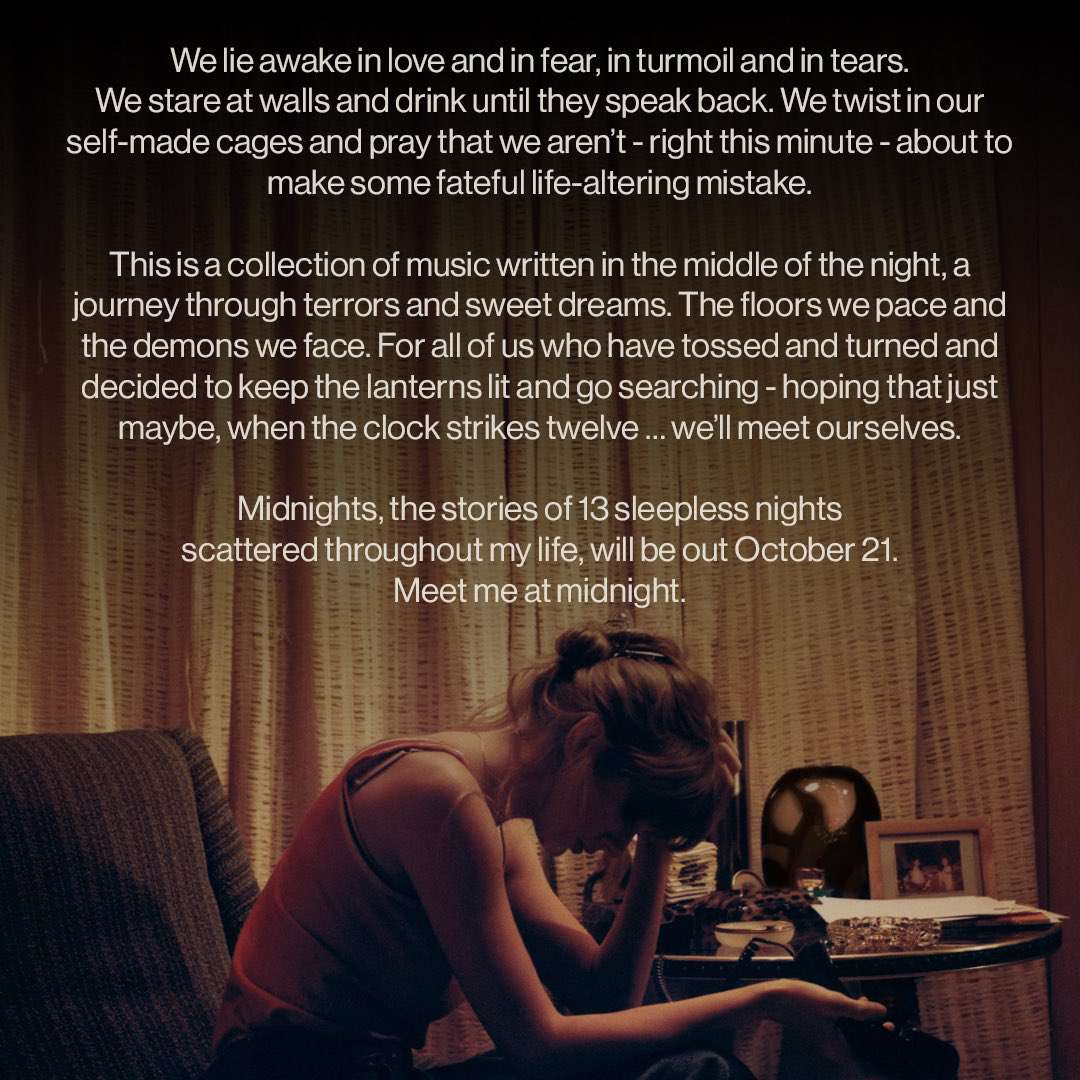 But, Swiftie Naomi Ashenafi (11), says the opposite for the new release. “I loved it! It was fun & versatile and a new era for Taylor,” she states.

Many love Swift for the variety of genres she has. This new album was pop but many think it has a new specific tone and sound to it that was different from her previous albums. Ashenafi has been a fan of Swift for years now. “I’ve been a Taylor Swift fan since childhood, her songs would always play on the radio and my siblings and I would sing along like crazy,” she explains. Swift’s older songs are what most teenagers grew up with and from then on they either stick to those songs as their favorite or continue to expand and grow their love for Ms. Swift.

When Midnights was released, Ashenafi listened to it right away when she received the notification and even hung up on her friends to listen to it. To Ashenafi, she has too many favorites to pick just one song. She doesn’t dislike any of the songs and feels as if all of the new songs were amazing. She also felt emotionally connected to the album as the album mentions songs about growing up. “The lyrics really emulated my feelings about school and growing up so quickly, feeling further and further away from childhood,” Ashenafi states.

The album had more of a deeper and more emotional perspective. The songs lean towards old relationships, romance that feels as if you’re in Paris, being young and on your own (kid), karma, and being a ‘mastermind’ in situations. A lot of teenagers on social media platforms state that they relate to Swift’s creative, thoughtful lyrics, and that’s why many favor her. “I love Taylor Swift. Her lyrics are so emotional and brilliant and every part has a hidden meaning that you can only truly understand if you relate to it,” Ashenafi claims.

Swift is overall very thoughtful when writing her lyrics and she knows how to pull one’s heartstrings while also trying to relate different situations she’s experienced to her fans. As many people love or hate the new album, one listen never hurts anyone. “I wouldn’t consider Midnights her best album because she has so many albums that highlight different parts of her career and the eras that she went through. They’re all amazing and I think that everyone should definitely give them a listen,” Ashenafi states. Although Midnights explores a new creative sound of Swift and everyone has a different opinion of the album, Swift continues to grow her fanbase and almost everyone will cherish her music, old and new.