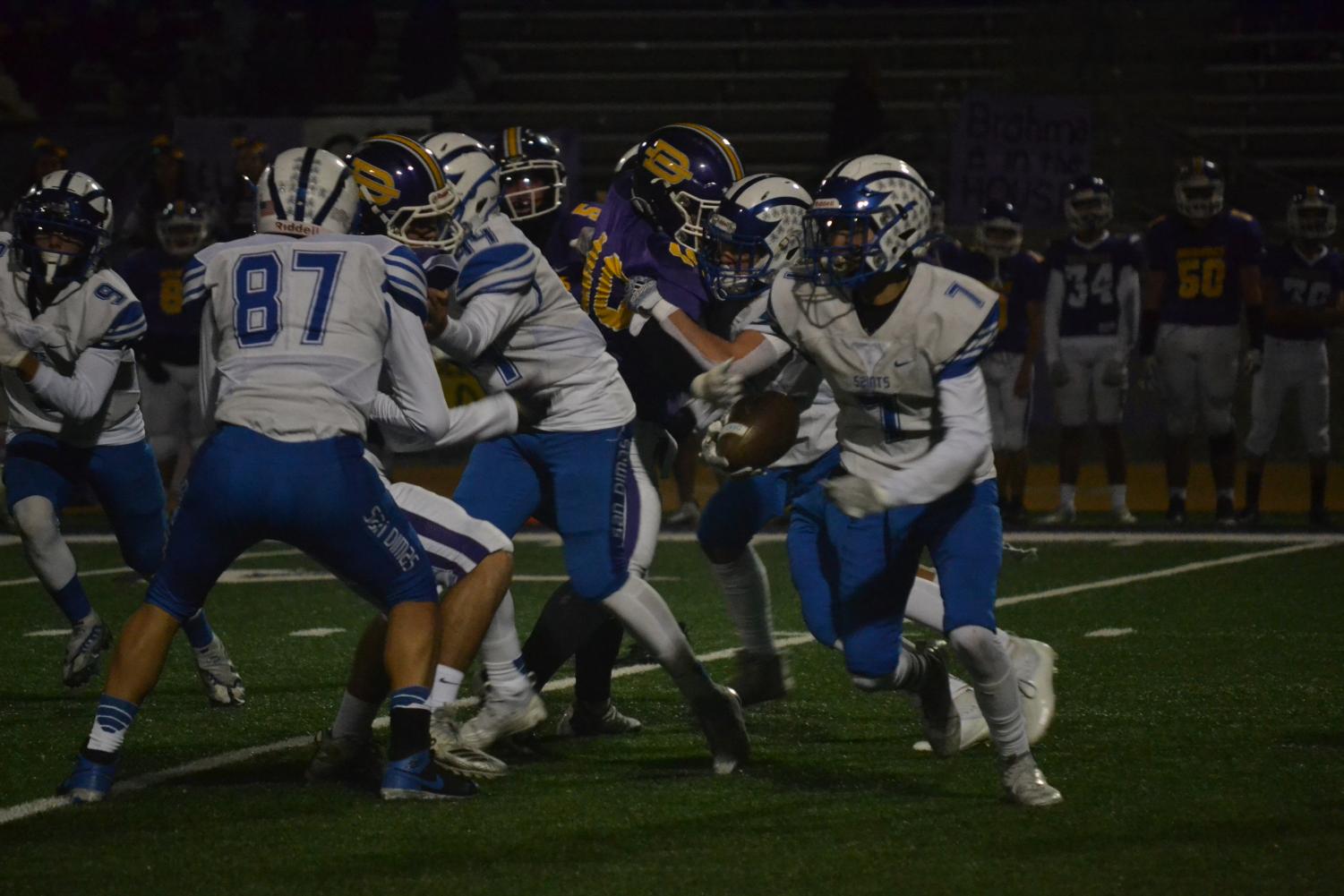 Saints Defeated by the Brahmas

On November 18th, 2022, the season for our San Dimas Saints football team ended. Although the outcome of the game was disappointing and wistful, it is safe to say that our boys put up a fight to try to accomplish yet another round of CIF. Despite not being able to continue in CIF, it was the first time our Saints had made it to the Semi-Finals since 2020, and San Dimas is very proud to watch another one of our teams accomplish yet another milestone.

Going into the game, Junior Brian Jackson explained, “I was excited to play at the beginning and nervous, knowing it was going to be a battle for the win”. Everyone, on and off of the field felt nervous as they were about

to watch the game that would determine which team would be moving on to the last round of CIF, finals.

In the first half of the game, Diamond Bar came out and scored the first touchdown. This caused them to take the early lead of 7-0. During the remaining time of the quarter, there were no other points scored which created tension between the teams and motivated the Saints to leave all of the hard work they put in this season on the field.

Moving on to the second half, after a scoreless first quarter, it is safe to say our Saints came back strong. A touchdown was made by Senior, Brian Freeland with four minutes and forty-four seconds left in the half. We were now caught up with Diamond Bar and were on the comeback.

Both of the teams scored in the final two minutes and twenty-eight seconds of the game, as Diamond Bar held a lead on us until Junior Brian Jackson scored yet another comeback touchdown.

As the boys on the field and the crowd that flooded the stands began to grow more anxious, time was quickly running out. When the clock hit twenty-six seconds, the quarterback on Diamond Bar passed the ball to Bernardino in the end zone, leading to a 34-yard touchdown pass, giving the Brahmas a lead of 21-14

With no time left, the clock ran out and the 2022 football season, had come to a strong, sad, yet successful end for our Saints. After the game, the Seniors were filled with the emotions that their last ever High School football game had come to an end. Jackson says he will do his part to encourage the team next year, as this may be the end of his football career. He feels that “since next year is most likely my last year playing football, I wanna [sic] give it my all. I want to win it all, even more than before because of how close we were this year and the final outcome. I will make sure we all work hard the whole season to succeed and accomplish a great season as a team”.

Despite the game’s outcome, our boys had an amazing season and showed their capabilities as athletes as they continued to strive through the rounds of CIF. The 2022 San Dimas Football season may have come to an end, but our Saints will be back in 2023 to continue to strive to be the superb athletes, students, and humans that they are.