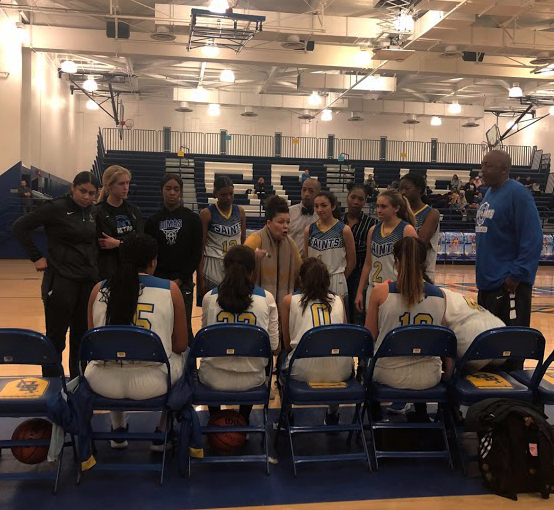 On January 18, the San Dimas girls basketball team took on Baldwin Park. The Saints have a long rivalry with the Braves. The game started with the introduction of the team’s seniors Caroline Cobo, Kyla Cormier, Summer Montoya, Elyssa Velazquez, and Ashley Grover.

The game had started and the Saints were going back and forth on the court making baskets and defending shots. The Saints led by a mile in the second quarter with Braves scoring only three points and the Saints scoring eleven, totaling the halftime score of 21 to 13.

As half-time came to a close and the third was underway, the Saints stuck to what they were trained to do, and that was to dominate. They really showed all the spectators what they were made of. As the third quarter ended and the fourth had started, the Braves were fighting until the end, but the Saints shut them down with a final score of 44 to 36.

The Saints couldn’t have done it without the awesome and dedicated coaches they have especially Coach Denise who has dedicated a lot of time to the team and helps them day-by-day. Coach Denise is a fighter, she herself battled cancer and won and even after that, she comes back to the court to teach the team everything she knows. San Dimas is lucky to have such great coaches that take our teams to such great heights.