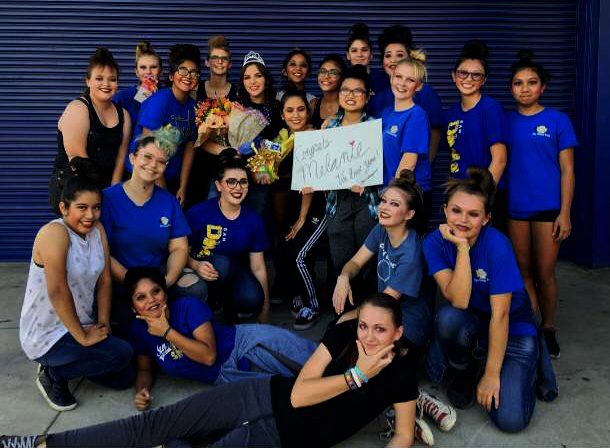 Just who is the San Dimas Winter Guard? You may remember their faces from our fall Football season when they were performing at halftime with Band, but now that the winter season is here, the Winter Guard is getting ready to show off their skills with flags, rifles, and sabers galore!

In their new show, “The One That’s Left Behind”, the Winter Guard is telling the story of “a person’s journey losing someone and coming to terms with that feeling”.

For their new show, the Winter Guard looks to their advanced members for guidance. They especially look for guidance from their Guard Captain, Melanie Tubbs, due to her experience and skill. When asked about the new season, Tubbs states, “This season seems to be going smoother than previous seasons and the guard as a whole is a lot closer than we have ever been.”

From tossing flags to spinning rifles, Tubbs and the advanced members of the guard are also responsible for teaching new members everything they need to know, especially the ones who join just for the winter season.

Every new season the members of the Winter Guard have to learn an entirely new show and create all new work to go along with it. This year, Winter Guard has around thirty-five members with almost half of them being middle-schoolers from Lone Hill. All of them practice every day during school, and while some students go home to do homework, most come back to school during the week to practice at night.

They all work hard to shoot for the highest score at their competitions where they face other Winterguard groups from different schools in California.