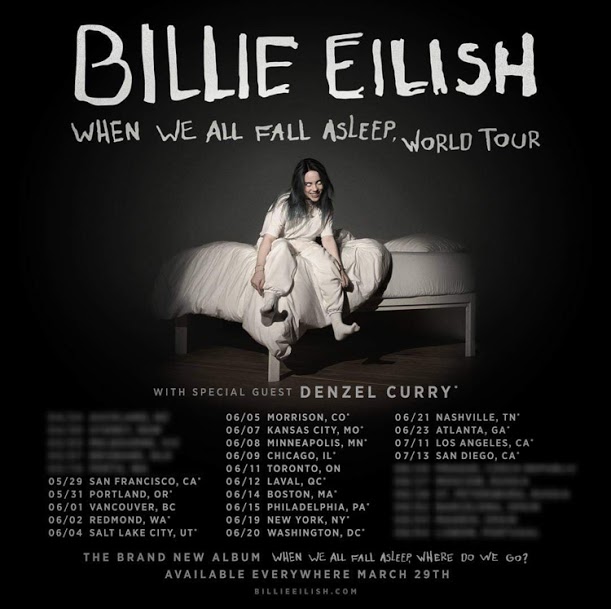 Listen Before I Go

What to expect from Billie Eilish’s new album “When We All Fall Asleep, Where Do We Go”.

On March 29, 2019, a new anticipated album was released that fans have been waiting for. The singer of this album is no other than 17-year-old Billie Eilish. Her style of music is very out of the ordinary and part of the reason so many teens and young adults connect to it.

Many know her style as “indie pop”, but there isn’t really a category that Eilish’s music could be put into. Her fashion isn’t much different. Her signature outfits are baggy and expensive pieces that create a unique style that many of her fans try to achieve.

She released some songs prior to her album that includes; “You Should See Me In A Crown”, “When The Party’s Over”, and “I’m a Bad Guy”. These songs took the internet by storm and sent her fans going wild and wanting more.

Along with the album, special exclusive merchandise was created to help promote the new release. The website shows the vision of what Billie wanted her fans to see. When you open the website, there is a virtual reality visual of a bedroom and options to her music, merchandise, and tour.

When listening to the music, you can hear different bits and pieces of Billie talking and saying different things that take her music to a more personal level and that make the listeners feel more connected to the artist. Whether you are a long time listener or have never heard of Billie, this new album is definitely one to listen to.