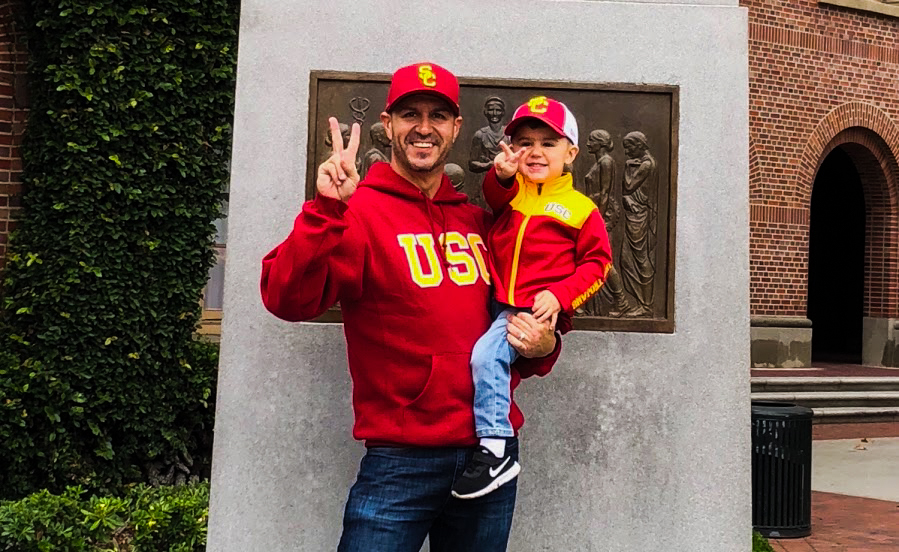 Mr. B and his son in front of the USC Trojan statue.

Mr. B and his son in front of the USC Trojan statue.

College Scandals Shock People All Across The Nation Especially Our Very Own Mr.B

As high school students, we all feel the unbearable pressure to excel in our classes in order to graduate and get into the college of our dreams. All of this pressure and hard work, simply for the satisfaction of moving onto the next educational level. Although we believe that the college we get into is based on our work ethic, self-discipline, and grades, recent high school students have started to believe otherwise.

Wealthy parents have been committing fraud and bribing universities to accept their children into certain elite schools. This unjust method of getting into college leaves current high school students feeling frustrated and cheated. Students who have worked hard throughout their K-12 careers are left with the bitter reality that, it all might not matter.

As a current high school student with all the pressures of looking, and investigating into colleges, this makes me feel unmotivated, and as if my efforts are unappreciated. I don’t want some wealthier person to take my place just because they can buy the whole campus an annual pass to the local country club.

As a high school teacher, who supports his students in their pursuits of going to college, Mr. B has returned to college himself. He currently attends USC’s Doctoral program. USC is recently one of the universities in the hottest water.

As Mr. B expanded more on his annoyance, he recalled what a struggle it was for him as a student to get into top tier schools.

“I never thought I could go to USC when I was younger. I didn’t have the grades, the mental capacity, or studious habits, but as I got older, I developed that. I earned my way into that doctoral program! When I get to that diploma, and it says ‘Dr. Bryan Wierzchucki’, in two years from now, I want to be proud of that, and I don’t want people to go ‘You’re at that school that takes rich people’s money’. It almost tarnishes your diploma because it takes some of the prestige off, and that bothers me a lot.”

Mr. B still wears his USC gear proudly, but since the scandal, people have made jokes about it, but to him, school isn’t a joke.

“I still walk around in my USC sweater and people come up to me like, ‘Oh, are you on the crew team?’, and they make all these snarky comments. I didn’t do anything wrong, I earned my way, I’m not rich.”

Mr. B left an important message, he wanted to remind us that even if life is unjust at times, work to your goals, and get what you deserve. Students shouldn’t be discouraged by this event, students should only use this as an example to work harder towards success because cheaters never prevail.