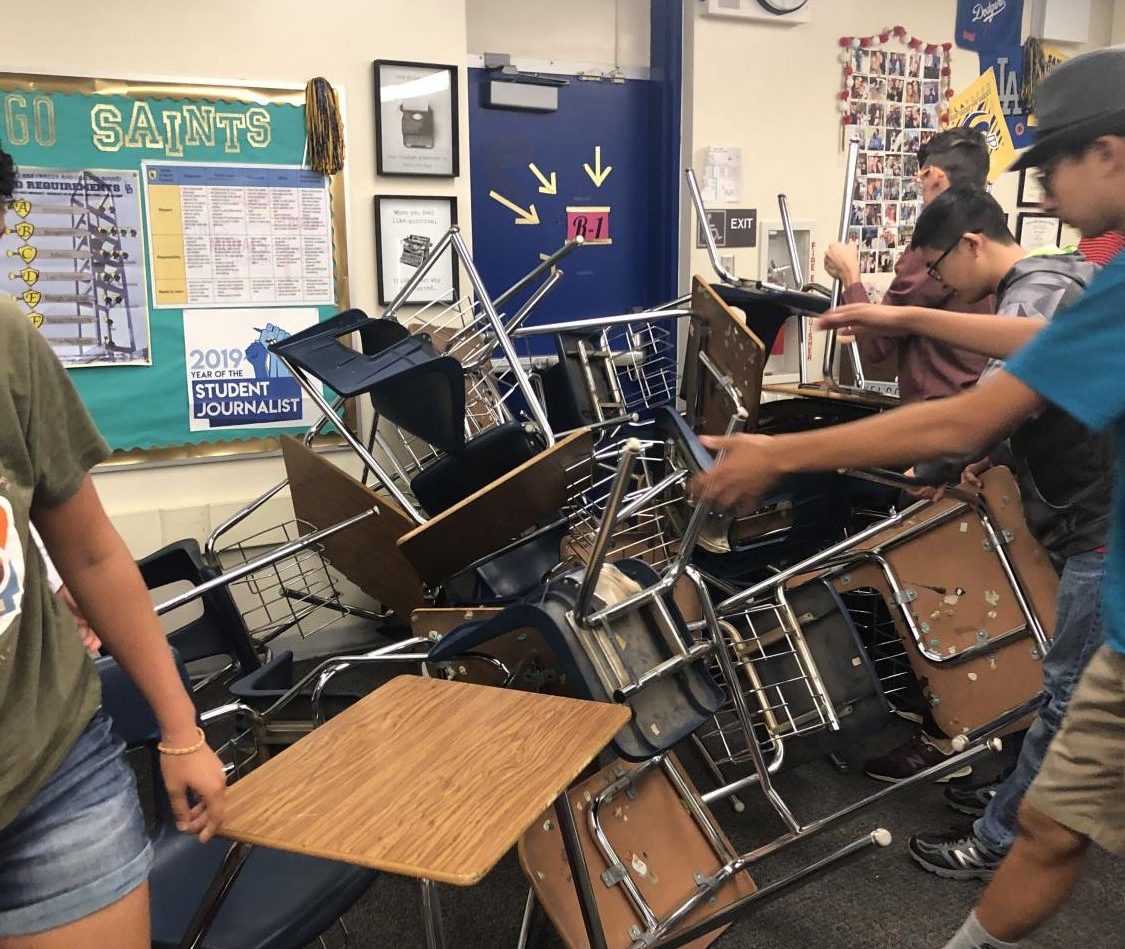 Students build barricade during lock down.

Students build barricade during lock down.

On the 22nd of August, a lockdown was issued during passing period, alerting students and staff to follow active shooter protocol. Caught by surprise, they rushed to action and were confined to their classrooms for upwards of an hour. Speaking out on the situation, Assistant Principal Rita Kear praises her Saint’s preparedness as safety is her number one priority here at SDHS.

Looking back and speaking about the incident, Kear remembers, “The first thing that came to my mind was getting my Saints in class, and that’s what we did. We did so in under a minute; Admin and Campus supervisors did not take cover until every kid was in class.”

Despite coming completely out of the blue, staff and students performed professionally and assertively under pressure, not knowing what outcomes lied ahead of them. Upon being notified that all of her kids were safe, Kear felt relief and a sense of accomplishment that their jobs had been done.

It is my responsibility as an administrator here to protect you, And if that means putting my life in danger, well I didn’t even think of that.”

No matter what the situation, Kear is there for her students, and lived by that responsibility wholeheartedly that day. Kear felt it was her duty to continue to keep SDHS a safe place just as anyone with such a connection to the school should, given her very own kids once attended San Dimas. “My three kids were protected back then, and just as I was with them, your parents trust me. When you step on campus, they trust me that I’m going to do everything in my power to keep you guys safe.”

As the commotion settled and school had gotten back on schedule, it had been disclosed that the alarm was false and that the call reporting armed men on campus had been a prank. Kear recalled feeling a sense of relief knowing no one had gotten hurt, however, she was “very upset that one of our own students would do that. “The whole situation had resulted in worry and concern amongst students, staff and even parents”, as Kear noted that there had been about 700 concerned parents that had come to pick up their kids.

The San Dimas Sheriff and Fire Department had also been present at the scene, as well as local television stations that captured the shocking event. In today’s day and age where threats like the one that occurred cannot be taken lightly, this was a very serious matter, and serious consequences were issued where it was due.“I just feel it’s sad that one of our students felt the need to disrupt the lives of so many” said Kear.

When asked what is something she’d like to say to her students to ensure their safety, she said, “I am so proud of my students who took it seriously, and that to me is the first step we can take to becoming a safer school. We offer a very secure campus, and a great administration to help keep it that way for years to come.”