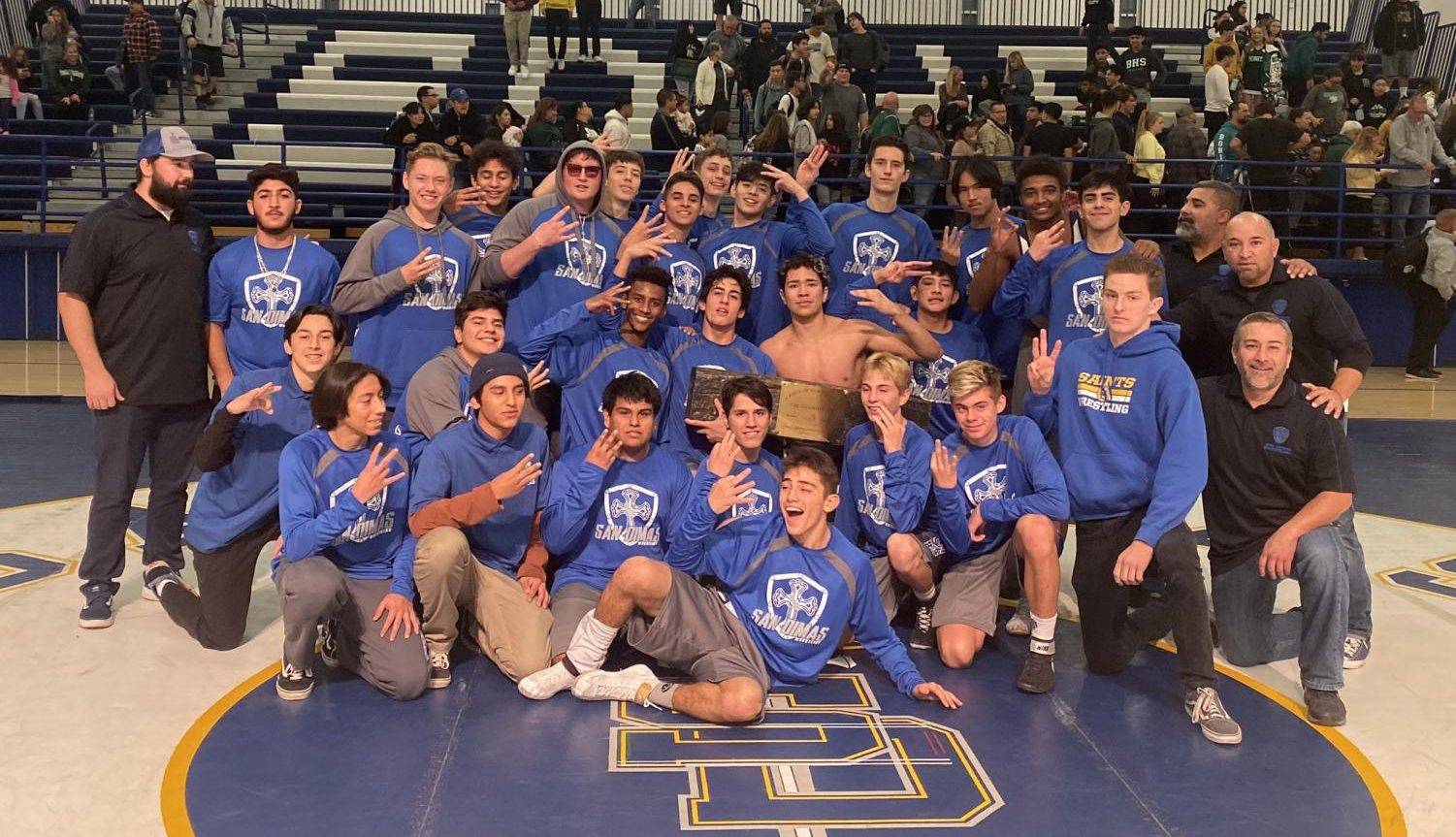 The biggest event of the San Dimas Wrestling season is undoubtedly the battle for the railroad tie, the long-lasting rivalry dual against Bonita High School, where a battle across 14 matches to declare who gets to hoist up the railroad tie, a piece of local history turned into a prized possession for both schools. The stage is set at home, in San Dimas’ very own gym, and the Saint’s intended on keeping the tie for the 3rd year in a row.

Looking back at last year’s event, the dual took place at Bonita. With a tremendous victory back then for a back-to-back title, it also came at a cost. Many seniors graduated and said farewell to their high school wrestling career, leaving two spots on their roster only to never be filled. Flash forward to 2019, where this would prove to be crucial, as without wrestlers to fill the spots would result in a forfeit of points over to Bonita. Therefore knowing this, the boys had to train intensely, as they could not afford to lose any points due to their preexisting deficit.

The Saint‘s had been preparing very hard leading up to this dual. The attitude, mood, and work ethic was all business, as they had no intention of losing to the Bearcats. Building their stamina and improving their technique was their biggest priorities. Practice would consist of grueling hour and a half practices followed by an hour of conditioning by running miles, sprints and bleachers. Although tough, it’s what must be done to wrestle their best.

The night had begun. First to step up to the mat was San Dimas’ Junior Varsity. This years team was made up of a lot of new talent, where experience ranged from 1 year to a couple of months. Nonetheless, they were ready to prove themselves and the crowd the hard work they’ve put in. It was an uphill battle, and although they fought hard, they had fallen to Bonita’s team. Watching from the stands was the Varsity team, frustrated yet invigorated to seek vengeance, and avenge their fellow teammates.

While Varsity went to warm up in their wrestling room, The Girls wrestling team was also watching the previous matches, and too were pumped to show their might to the Bearcats. The girls are no strangers to tough training either, as they planned to repeat their rivalry win from the year before. And with a sweeping victory against Bonita’s roster, they showed they were a force to be reckoned with. “As soon as I got my hand raised, I felt like I was finally going to start getting recognition for all the hard work I’ve put into my training.” said sophomore, Cammie Ortiz. With the girls victory under San Dimas’ belt, the time had come for Varsity to go to war.

At last, Varsity ran into the gym where the crowd excited to see the two teams battle it out. With the introductions completed and the shaking of the Captains hands, it was showtime. Staring off, the Saint’s were immediately hit with that gut wrenching point deficit, only reminding them of the stakes of their matches. Unfortunately, few Saint’s had lost their matches, adding onto the pressure for the rest of the team. However, the boys had hit their stride and as they started to pin their opponents, they slowly but surely climbed their way out to tie the score.

It had all come down to the last match. Cheering and tension filled the gym, as any small mistake could result in a victory or an upset for either side. Senior, Adrian Flores, took to the mat, knowing what he had to do, and pulled off the dual-winning pin. “It was exciting winning the dual for my team. I’m grateful I’ve been able to beat Bonita all the 3 years I’ve been wrestling, and glad I didn’t let my team down.” says Flores. The team immediately began celebrating their win, as they had kicked the Bearcats out of their house, and kept the railroad tie at home for another year.