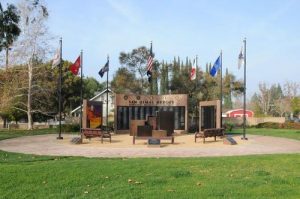 Veterans Day is a day created to honor all of the people who have served in the armed forces and thank them for their service and sacrifice. A few of the many veterans in San Dimas and the surrounding area were able to share their stories and how they felt about their time in the service.

Mike Johnson, a U.S. Marine Veteran who served 8 years in the reserves, felt like the Marine Corps was the place for him to be. He believes that one of the biggest components of being in the Marine Corps was the comradery. Even though many people who entered basic training faced a huge cultural shock between each other, everyone became brothers and sisters through their experiences. “Once you become a Marine, you’re surrounded by people who have amazing character and who are all very solid individuals,” Mr. Johnson said

For the most part all of the training we had was to adapt and overcome any obstacle, you learn how to either go over, around it or through it no matter what it is. That aspect of it prepares you for later in life.”

Jon Rush is a Marine Veteran who served 4 years of active duty as a Tank Crewman on an M1-A1 Abrams Tank. “For the most part, all of the training we had was to adapt and overcome any obstacle, you learn how to either go over, around it or through it no matter what it is. That aspect of it prepares you for later in life is earning your Eagle and becoming a U.S. Marine,” Rush says. “We were always able to have fun and enjoy ourselves as well, even though there are obviously negative and stressful parts of being a Marine,  just like there are in life. There were so many amazing new things I was able to do because of the Marines, and it all helped me out in life,” he continued, “The Marines taught me how to push through so many things and it was one of the biggest parts of my life.” Rush Currently works as a violent crime detective for the Azusa Police Department and enjoys deep sea fishing, playing the drums, and most importantly spending time with his family.

Staff Sargent Antonissen is currently an active duty Marine. “I would give the cliche answer and say I wanted to do something bigger than me, but I would be lying. I wanted a career with benefits, to get out of Riverside, California, and make myself marketable to be hired by the Riverside police department,” Antonissen said. “After a little more than 8 years of being in the Marines I’ve had many moments. The good, the bad, and the ugly come to mind but in particular, it resorts to the difficult times which are the most memorable. The first one is receiving the title of a Marine. The second one is deploying to Afghanistan and lastly is moving to Spain with the family,” he continued. When mentioning how the service has changed him, Antonissen responded, “Prior to enlisting I was in college going with the flow of society and hated it. After I enlisted, I became self-reliant and matured drastically. I obtained leadership and management skills that I believe I wouldn’t obtain anywhere else.”

Johnathan Hawkins is a member of the U.S. Marines. He says, “I joined because it was something that I have always wanted to do, and I felt like if I didn’t join and went off to do other things, I would have always regretted it and wondered what it would’ve been like if I had joined.” When referring to his experience Hawkins says, “The whole experience itself was something you don’t get anywhere else. Of course like anywhere you have your good days and your bad days, but even the bad days were just moments of learning how to better yourself, those around you, under you, and above you. Everyone works together regardless of rank. They may have different roles but it’s all for the same goal, mission accomplishment. I was with a headquarters and supply company as a motor vehicle operator for a tank battalion,” Hawkins continued. “My job was to transport whatever supplies were needed from base out to the tanks on the front lines, my best moments I had were all the training we did to master what we had to do overseas. We would spend weeks out in the field moving around from site to site driving through unpredictable terrain and take part in live-fire drills with tanks, machine guns, and artillery. I know for sure the Marines changed who I was. It made me a more confident, take-charge person and taught me how to get things done not only quickly but efficiently with teamwork. Today I work for a sheriff’s department and knowing how I was before, I don’t think I’d be where I am today if not for all the training and experience I earned with the Marines.”