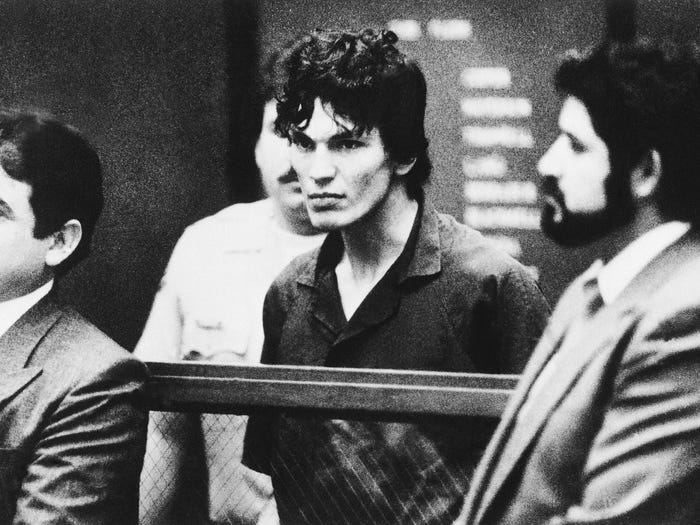 The Story of Richard Ramirez: A SoCal Killer

The story of the infamous Night Stalker

With his dark mysterious figure and his insidious killings, Richard Ramirez is one of the most notorious serial killers to ever live. He was known for creeping through unlocked windows on cold LA nights and hiding in the shadows. Then to proceed to murder the people inside to fulfill his need for killing. The new Netflix documentary,” Night Stalker: The Hunt for a Serial Killer” brings new light to these murders sprees and shows the detectives responsible for piecing the clues together and bringing Richard Ramirez also known as The Night Stalker to justice.

Richard Ramirez during his killing spree of 84’ to 85’, Ramirez killed 14 people and sexually assaulted and molested many others. In “Night Stalker: The Hunt for a Serial Killer” showed the timeline of when the killing started in Los Angeles and to his capture in 1985. The show did a fantastic job of showing the real-life fear that Ramirez was able to project over all of the Los Angeles residents during the ’80s. People lived in actual fear and everyone doubled checked their doors and windows at night. From him killing in neighboring cities like Monrovia and Burbank. His dark shadow covered all over Los Angeles county. Even our own city of San Dimas made an appearance on the show as well. The rulers shown in the show measuring the shoe print found outside of a crime scene were produced in San Dimas. This gave off an eerie feeling as it felt like these killings were just in our backyard and how a few cities over, there were gruesome murders that took place almost 40 years ago.

The mini-series also gave a major insight into the entire investigation as it showed evidence, police interviews and statements, and the whole process of the Night Stalker investigation team. This story almost feels like a movie as some of the survivors’ stories felt too crazy to be true. One survivor even telling how the bullet that Ramirez shot at her and should have killed her but actually deflected off her keys she was wearing which ultimately saved her life. These personal accounts with this monster tell the story of survival and their own personal experience with Richard Ramirez.

“Night Stalker: The Hunt for a Serial Killer” shows the harrowing experiences and the hard and painful process in which the entire investigation team went through. With each detail of the story sounding like a psycho-thriller horror movie and completely shocking the audience with every new detail of the crime. It will surely be leaving jaws dropped and stomachs turning. This docu-series is definitely worth your time of watching and is now available for streaming on Netflix.