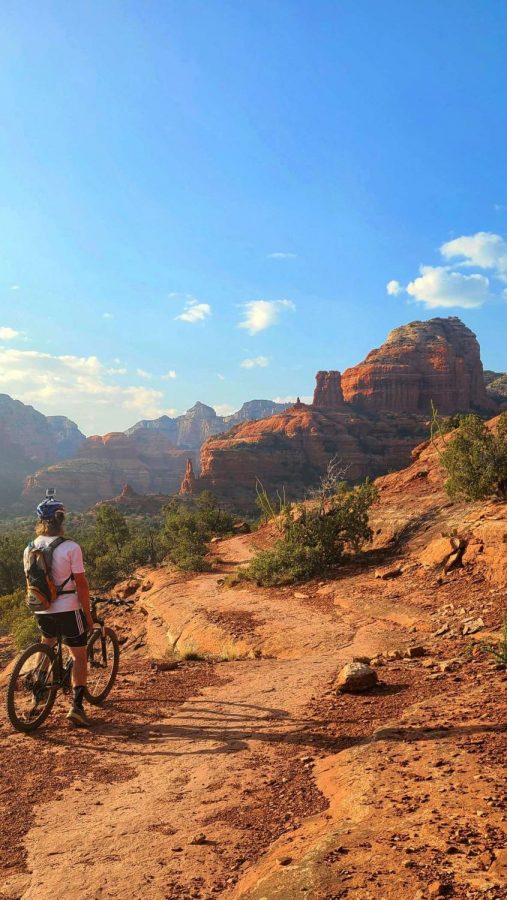 “I ended up going mountain biking on a fire Road where (apparently) you’re not supposed to park at the bottom of. So anyway, I ride up this fire road and come to the clearing with the radio towers. I have ridden up this road before, the sign at the bottom says that like two miles up there “The San Dimas Experimental Forest” begins, but I’ve never seen a sign on the actual Road so I keep going. It’s an old dirt road and right before the radio towers I see this sign for Bluebird Ranch and I’m like huh, I wonder how they have all that land cause this is all forestry land. Anyway, I keep riding past the radio towers, this is like after a 2500 foot climb in elevation and an hour or so of riding.  I came across forestry service people doing a botany survey. They’re super nice and let me know that I technically shouldn’t be up there, but they don’t care, so I’m like cool.

So I make it to the end of the service road that connects to a mountain road, and I turn around to go down another service road that both google maps and Map-My-Ride say is a truck trail. So I’m figuring okay, it’s just another access road, nothing too crazy, It ends up being HELL to ride. I don’t even want to put in the effort to describe it in detail, I have GoPro footage of the whole 2-hour ordeal. So I start riding down this dirt road, and then all of a sudden it turns into barely a trail, then literally nothing at all. I’m in the middle of a forest with barely any trail in front of me, then literally nothing at all, crawling my bike through the trees, spiky bushes, etc. I am doing this for I don’t even know how long ( it’s almost as if the truck Trail was driven once in the ’60s and never used)  I eventually make it to a fire station at the end of a road I know, and I call my mom because at that point my tire was flat and I couldn’t ride. She drives me to my car (which I was planning on riding two, like one big loop) when I arrive at my car I find a very angry guy waiting for me.

Apparently, he had been waiting over an hour for me to get back and was getting my car towed. He called the police and everything. It turns out he was the Rancher that owned Bluebird Ranch way up in the mountains. The reason he was angry is because the trailer that was carrying his cattle shipment couldn’t fit past my car, even though I parked way off to the side, however, it was a huge trailer. He explains to me he’s down 500 bucks because he has to wait till Friday to get his cows now.  it also turns out that it is very legal to ride my bike up that trail and on those roads, the workers at the radio tower had seen me cold forest rangers on me, they had also called The Bluebird Ranch guy. The owner of the ranch eventually calms down when he figures out I’m just a guy trying to mountain bike, he is still mad about the money, however.  I end up offering to work off the money that I owe him, he mentioned maybe hiring me after I work off the money but that’s a long shot. The cops also came but they left pretty quick once they realized we were good.  It was also 95 degrees outside which is why I have heat stroke right now. In total, I rode about 8 Miles and walked through the jungle about 2-3. The moral of the story is not to trust what Google tells you is and is not a road.” – Aidan Ferguson