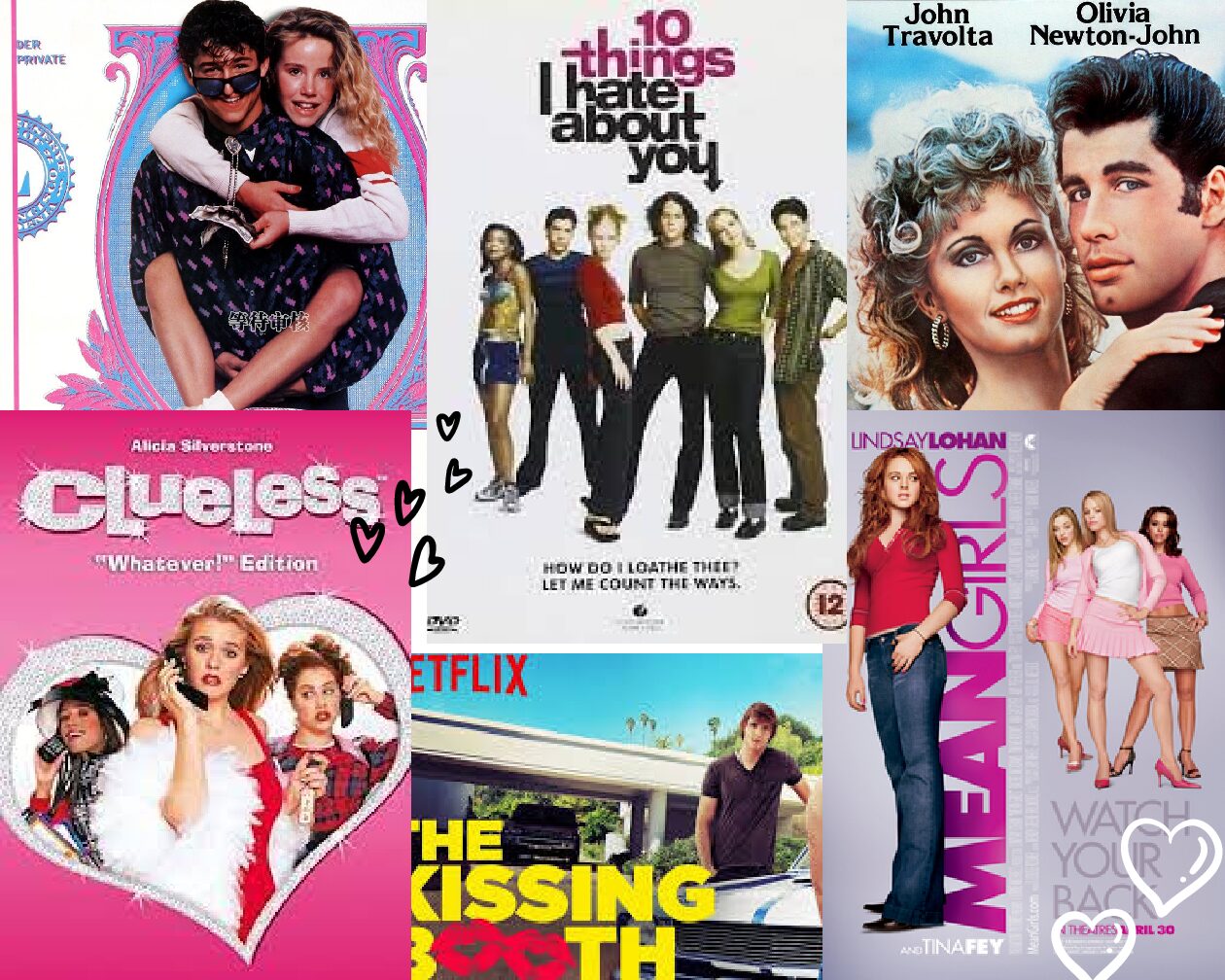 Television what a wonderful distraction from homework; relationships, everybody wants one, so what are these two vastly different subjects have to do with each other? Well, most hopeless romantics and lonely souls with their chip bags or popcorn turn to rom-coms of course, especially when it comes to Valentine’s day. But how realistic or similar are the tv portrayals to the real deal? It seems that there are some over glorifications, similarities, and flat-out fantasies. Diving deep into what high school life is compared to the all to clique tropes most commonly seen throughout the ages on the big screen.

Starting off with relationships, why is it always the nerds pining after the hot popular chick or the cheerleaders with the football jocks? Well Aniyia Woody, a sophomore, says “I feel like those movies are made for those nerdy kids to inspire them to have a chance at getting the IT girl… when in reality it’s just a not what really happens all the time kind of thing.” Just a sweet love story, is that really all rom-coms are? Surely they must serve a better purpose than to be a feel-good movie to pass the time. Sam Rheuark, a junior, completely agrees for in real life things aren’t done that way. “People date who they want to date and who they’re interested in. It’s not so much as opposites going for each other but more like who you like,” explains Rheuark.

The way they react to each other and the way they communicate, and when problems arise, and how they deal with them. ”

In real life, things are more complicated when it comes to relationships in general. “There is a lot of depth that goes into a relationship, especially when you’re more mature than a freshman,” says Rheuark, “there are a lot of factors when it comes to being interested in someone or in a relationship with someone, and television is often seen as I have a crush on you even though I don’t know you and we are gonna get together then have a major fight and break up and get back up together.” People experience emotions differently, feel things differently, and are often insecure at times. By showing people, especially girls, as only a love interest or quick romance it doesn’t do the real thing justice, and it could lead to false ideas on what love or a relationship is like.

Where in reality we may never fight or we might fight a lot, and that’s really just communication errors. ”

Television does a great job of either ignoring or overdoing the fact that couples do cheat on each other. To create drama is the only logical reason why the movie industry would insert a breakup based on cheating. “Most relationships in T.V. hype it up and say that they will be together forever and not cheat on each other, but that’s obviously not the case with reality,” says Woody. They also forget that relationships can be on-off, long-lasting, short, and don’t always end in tragedy.

But aside from the romantic side of the school, other meaningful relationships take place. Friendships are what make school enjoyable and memorable for everyone.  “I mean for me can go all day without drama and have a couple of laughs with friends before I go home, but it is not as eventful as the movies make it out to be,” says Citlali Salazar, a sophomore. “Yes, well I wouldn’t say as selective but people do want to hang out with people they like. And for me, when I was in middle school I hung out with a group of people, and now I don’t, only because they aren’t good for certain people to be around,” Woody adds. There isn’t a clear divide between friend groups based on stereotypes, in fact, there may not even be any stereotypes left for San Dimas High School to classify everyone under. “ I mean I will be going to class and people will be surprised with who I hang out with,” explains Salazar.

There is a lot of varieties within friend groups. ”

Rheuark explains how even the sizes of friend groups don’t match up with the movie adaptations. “In real life, some people don’t have large friend groups, and that’s ok, they may have only two best friends that they hang out with which is fine.” The popular crowd doesn’t need millions of fans, the jocks don’t always have to be friends with the whole team. As long as there is that one person you can trust and enjoy being with, it doesn’t matter how many friends you’ve got.

Regina George from Mean Girls is just one of the many clearly defined characters that could be described as toxic, but in real life, it is much harder to spot a toxic person. “You never know who it is, people are blinded by their love for them that they don’t see their bad side,” says Woody. After experiencing past friendships gone sour, Woody explains how those who were toxic to her hid their true colors. “At first they were super nice and I didn’t notice it at first,” recalls Woody. Rheuark gives their own opinion on the subject, “In television, it is a lot more clear that a person is toxic, whereas in real life there are subtle signs, it could be someone controlling your actions by saying let’s do this, or now that you have a boyfriend you don’t have any time for me.”

Just really subtle things, and in television, it is seen as the person’s fault that they were with a toxic friend when in reality it is more complex than that. ”

Toxicity aside, the fact remains that cancel culture and gossip are inevitable in both reality and fiction. Cancel culture being the main consequence to come out of gossip, has tremendous effects on both sides. Steve Morano, a sophomore, says “Honestly it’s bad for both sides, one side is getting hurt and the other side is just angry, and everyone is sad and mad, and one person is left feeling helpless while the others are all like bonded over something that made another person want to die.” Rheuark adds to Morano’s statement by saying, “though I do think some people should have repercussions for what they did and shouldn’t come back whatsoever, I think that making it a whole thing where everyone is ganging up against someone isn’t the best way to do that.” Popularity alone plays a major role in cancel culture. With so many people who know and respect you hear you spill some tea, most of the time they will believe it without question. So now the problem escalates from bad to worse, just because some kid with a bunch of friends remembers something bad you did a while back or made up a lie off the top of their head.

I feel like you could say something about someone if you have enough popularity and it just passes and nobody questions it, and now you have everyone in school hating you for a reason that may or may not be true. ”

Morano acknowledges that people should get repercussions for their actions, however, the timing must be right. “It’s really toxic especially the things that people did long ago, yeah they should have repercussions then like if it’s four months later people have changed, people change, and I feel like we shouldn’t linger on the past but focus on the future,” says Morano. But when the tea is hot, everyone wants to join in, and maybe that’s why gossip and cancel culture are so addictive. It’s much easier to hate someone than it is to be kind or forgive, and with so many people talking crap about someone, biased opinions may form making the situation a whole lot worse.

Now moving on to the last major question surrounding the genre of high school set movies, specifically rom-coms; are they a good example for girls to follow, or do they play a bigger part in pressuring women into society’s molds? For example Sandy from Grease, changed her whole appearance for a man, doesn’t that sound kind of similar to the typical trope? Rheuark agrees that the makeover trope is seen in society and that it is a problem. “It is a big pressure because there are social standards, there is a lot of social rules and constructs especially for females that they have to follow to appear attractive for a male,” explains Rheuark. Woody also goes back to Grease for reference when adding her opinion, “Definitely, for example in grease, when Sandy changed her whole appearance for a man, I was like can that be me? But women are told to dress a certain way to say certain things, to be married at a certain age, to have kids at a certain age.”

After the comparison of friends, relationships, and the well-known tropes, it is now somewhat clear how similar yet different real life is to fantasy. The popular crowd isn’t always mean. Relationships don’t always end happily ever after but are more complex and special. Friends, toxic or not, will always be subjective to each person and their comfort zones. Gossip and drama always find a way into high school life, no matter how it’s portrayed. And women are once again cast as a love interest, a popular chick who may or may not be toxic, and told the only way to get a man is through a makeover of some sort. Sure the clique tropes are fun to watch, but let’s be careful not to mix fiction with facts, after all, no relationship is perfect, no friend group is the same, and everyone no matter their social status deserves to enjoy their “best years of life” in highschool.